The conference focused on macro and micro trends shaping the future of governments and approaches to improving public-sector productivity.

The Asian Productivity Organization (APO) organized an International Conference on Public-sector Productivity in collaboration with the Development Academy of the Philippines (DAP) in Tagaytay City, the Philippines, 10–12 October 2017. The three-day conference attended by over 700 overseas and local participants aimed to redefine the role of government and public-sector productivity. 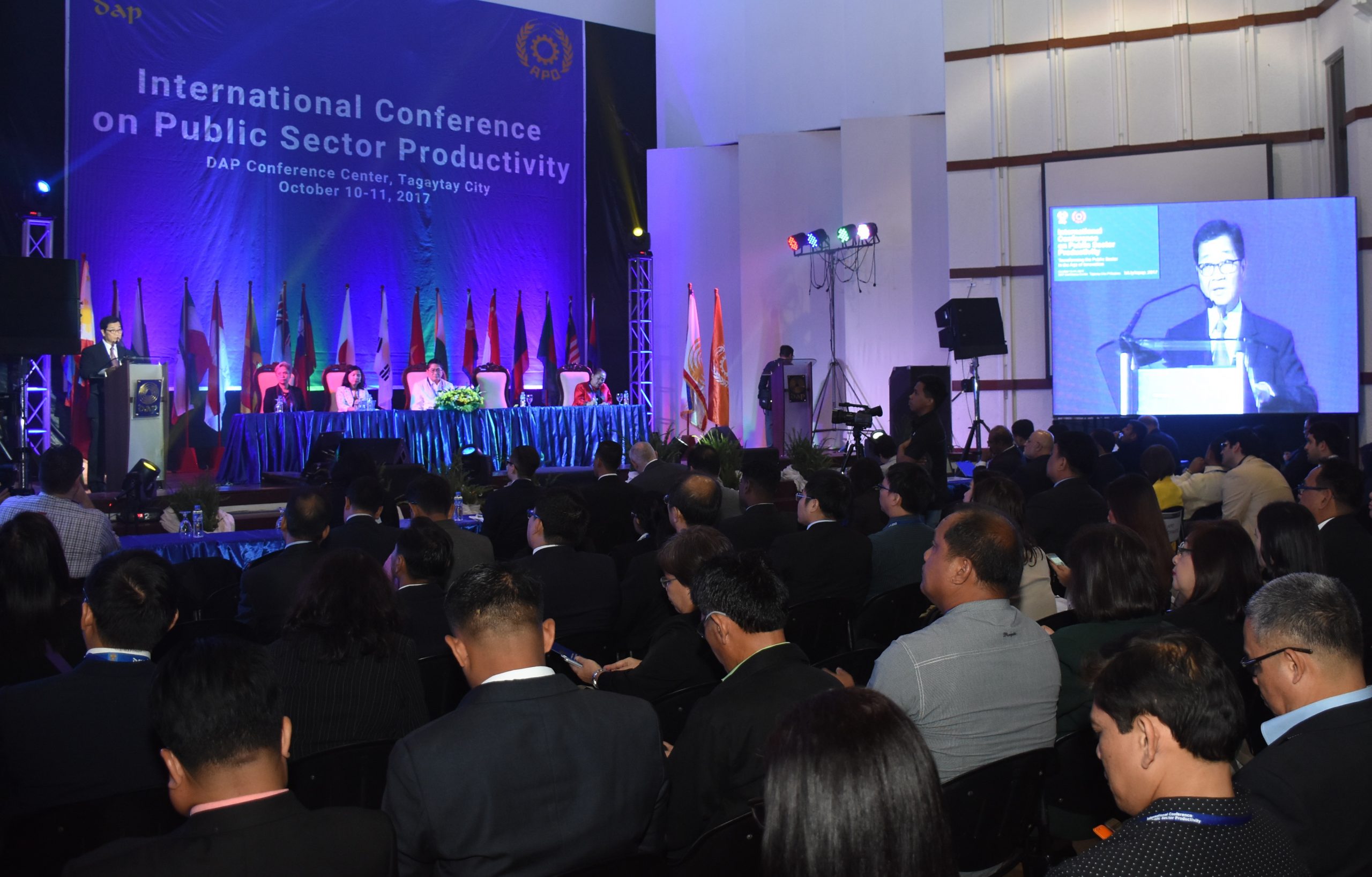 In the face of unprecedented volatility, uncertainty, complexity, and ambiguity mainly resulting from technological advances and innovation, the working mandate for governments to do more for less does not seem adequate to resolve issues such as economic inequality, unemployment, and population aging. At the same time, attempts to deliver better outcomes and experiences for citizens at a sustainable cost have been accompanied by the rapid dissemination of new technologies and tools. Public-sector organizations have never faced such extraordinary challenges and opportunities.

Delivering the keynote speech, APO Secretary-General Santhi Kanoktanaporn emphasized that strategic foresight capability was the key for governments in member economies to navigate economic, environmental, and societal uncertainties by anticipating and preparing for possible, probable, and, most importantly, their desired futures. He stated that the APO was working to help member countries be able to do that by setting up the Strategic Future Platform and Future Team as part of its Strategy Development Approach to provide powerful narratives on how the future might unfold in ways relevant to member countries.

The Secretary-General called upon member governments to abandon old perceptions of economic, productivity, and business models and consider how they could shape the future to meet their longer-term development goals. “Traditional productivity focuses on doing things right, for example, by doing things better and faster. On the other hand, Sustainable Productivity is about doing the right things right. To know whether we are doing the right things will require strategic foresight capability,” he said.

In his address, Senior Deputy Executive Secretary Menardo Guevarra, Office of the President of the Philippines, told delegates that changes initiated by the government needed to be managed by and had to involve people. He stressed that the use of technology in government operations could open room for further innovation that would lead to the creation of a knowledge-based public sector.

While emphasizing the need to mainstream participatory governance, the keynote address by APO Director for the Philippines and National Economic Development Authority Undersecretary Adoracion Navarro outlined the strategy of the Philippine government in implementing the concept of “one-connected government” and regulatory reform to achieve higher public-sector productivity.

The APO Public-sector Productivity Framework formulated in 2012 is a comprehensive strategy to achieve productivity gains, and the conference was part of a series of related projects to discuss the macro and micro trends shaping the future of government together with their implications for its productivity. The conference included an exhibition on public-sector productivity and alumni meeting of the DAP Public Management Development Program.