The former Secretary-General was recognized for contributions to improving socioeconomic development in the Asia-Pacific region. 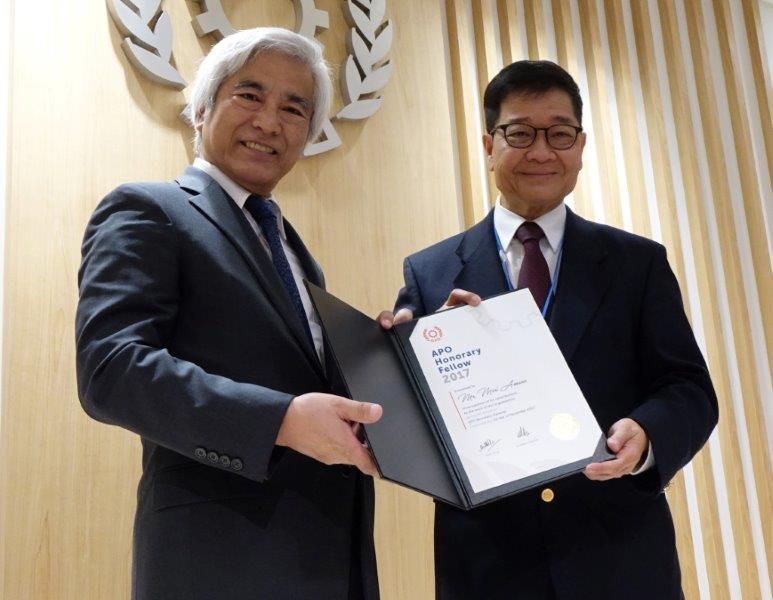 The Honorary Fellow title is conferred annually on NPO officers as well as secretaries-general for leading productivity initiatives and contributing to meeting the APO goal of improving socioeconomic development in the Asia-Pacific region, particularly in member countries.

As the 10th Secretary-General of the APO, Amano served the organization for three years, 2013–2016. A career diplomat, Amano had a distinguished 40-year career, including serving as Ambassador Extraordinary and Plenipotentiary and Permanent Representative of Japan to the Conference on Disarmament in Geneva, September 2011–2013; Deputy Secretary-General of the Organisation for Economic Co-operation and Development in Paris, 2007–2011; and Consul-General of Japan in Houston, Texas, USA, 2001–2004.

He also served as Acting Director-General of the Korean Peninsula Energy Development Organization, 2004–2007 and held posts in Japanese embassies to the USA (1996), Thailand (1994), Kuwait (1987), and the UK (1976) with assignments in the Economic Affairs Bureau, Economic Cooperation Bureau, Multilateral Cooperation Bureau, and Overseas Public Relations Division under the Ministry of Foreign Affairs in Tokyo.

Secretary-General Santhi thanked his predecessor for leading the productivity movement in APO member countries at various stages of development and creating a balance between their differing needs. “Your visionary leadership also helped develop the Roadmap to Achieve the APO Vision 2020 that we are committed to achieving,” he noted. Secretary-General Santhi also briefed Amano on the new initiatives and strategic approach of the Secretariat. “Keeping in sync with the changing socioeconomic environment and the fast-changing technologies that are driving economies and organizations to revamp their business models, the Secretariat has been focusing on enabling member countries to make their industries, services, agriculture, and public sectors smarter. It is also attempting to prepare them for the era of Industry 4.0 so that they can develop awareness, resilience, capabilities, and excellence at this critical turning point in history,” he stated.

Thanking the APO for the honor, Amano commented that the Secretariat could not have chosen a better time than the sakura (cherry blossom) peak to organize the conferment ceremony since it was very special for Japanese. The former Secretary-General urged the Secretariat to strengthen its alumni networks of previous staff and experts by keeping them informed about the developments at the APO. “The alumni can be a great asset and the APO should utilize their experience to further its goals of helping member countries improve productivity and efficiency,” he declared.