To reap productivity benefits, emerging economies must ensure that adoption of digital technologies is both wide and deep in the society.

Emerging economies (EEs) are also susceptible to the recent slowing of productivity growth, contrary to the common belief that it is limited to advanced countries. The current average total factor productivity (TFP) growth in EEs has dropped from its strong record during 2003–2007 to below its longer-term average level for 1985–2008. Since 2011, unstable rebounds in TFP growth have been seen in APO member EEs after recording negative growth in the period around the global financial crises.

The declining growth performance of EEs within the same period can also be regarded as reflecting the weakening of TFP growth. The determinants of the slowdown itself are multiple and elusive. They remain a topic of policy and theoretical investigations, and therefore it is difficult to devise a to-do list to prevent productivity slumps from worsening.

It is, however, important to carefully define the causes of slowing productivity growth, particularly considering the fact that it is taking place amid technological advances and breakthroughs. Interestingly, the tangible benefit stemming from innovations and technologies to improve production processes does not seem to affect declining productivity levels. In the context of EEs where institutions have not yet reached maturity, another concern to be addressed is whether and how this productivity conundrum can be reversed.

According to the Digital Adoption Index, a database on technological adoption maintained by the World Bank and Microsoft, the availability of digital technologies facilitating economic activities in a country is correlated with its per capita income level. Ensuring that a specific rate of technological adoption corresponds to a specific target of overall growth achieved is necessary to ensure that an economy can steer clear of a productivity slump.

Recent surveys[2] have shown that technology adoption in EEs still lags behind that in advanced economies, despite the fact that it is increasing at an unprecedented rate. The TFP levels of advanced economies have recently been five-fold higher than those in EEs, which may be related to slower adoption of technology. It appears, however, that massive technological adoption could shrink the technology gap between the two groups. 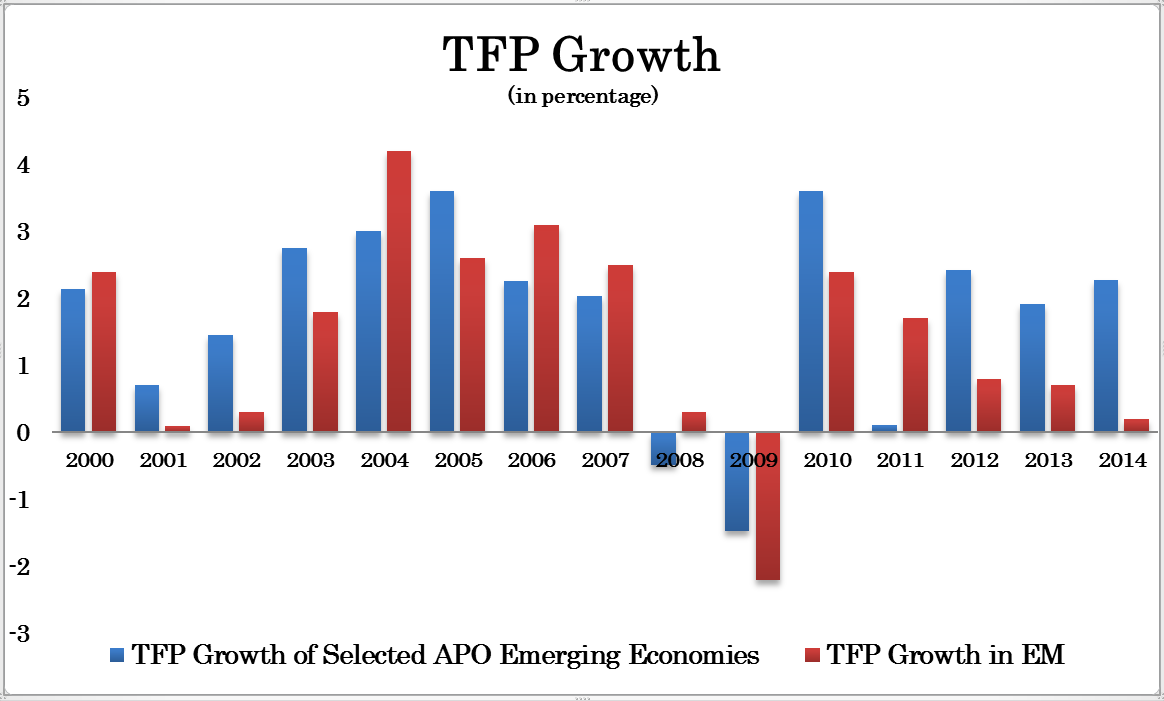 While the adoption rate of technology acts as an initial push for productivity improvement, its deeper impact is to a great extent determined by the proportion of workers in a country actually using innovations and new technologies in production processes, i.e., the rate of technological diffusion and penetration. Yet, the increasing technological adoption rate by EEs coincides with low penetration and poor diffusion rates. The failure to maintain a penetration rate that exceeds the increase in the number of workers will cause the economy to slip into a productivity downshift. Since technological developments and inventions usually occur in advanced economies, broad-ranging efforts are required to ensure adequate penetration rates in EEs. The capacity to diffuse technology at the optimum pace is determined by levels of education, economic openness, mode of R&D activities, etc. that are not technological factors per se.

Countries with better-educated workers exhibit higher diffusion rates of acquired technology. Therefore, educational attainment is one determinant of the likelihood of avoiding a productivity slump[3].  Another determinant, R&D activities, is only likely to occur in societies where there is a sufficient level of educational achievement. R&D is fundamentally associated with the adoption of new technology.

Firms tend to relocate R&D activities abroad if there are major cost differentials coupled with the necessary human capital able to sustain those activities at a lower cost. The greater the difference in terms of innovative capacity, the higher the rate of adoption of know-how and technology in the host country will be. When the flow of new technology can be transferred through R&D channels, the intensification of its diffusion and penetration in the host country will correspond with the education level. Effective efforts to prioritize the management of human capital stock to safeguard productivity gains from technology adoption and diffusion remain a daunting task for many EEs.

Economic openness is among the prerequisites for technology adoption and diffusion. New technology found in imported products is the initial method for importing countries to access it before adoption and diffusion. Copying and reverse engineering, for example, are well-known methods for firms in importing countries to gain immediate access to new know-how, including new business models.

Economic openness permits firms to operate abroad by means of foreign direct investment. Greater flows of knowledge and higher rates of technological adoption and diffusion can be achieved through foreign direct investment as it passes on physical technology and managerial know-how. Increasing the degree of economic openness may be one reliable avenue for EEs to raise productivity levels.

While new technological paradigms in which humans, devices, and the digital world converge to change the ways we interact, produce, and consume have been introduced, EEs should establish links connecting technology adoption to higher productivity levels that will elevate the living standards of their citizens. This could open up immense opportunities for EEs to invigorate their economies through revolutionary technologies and disruptive business models embodied in new technological concepts.

For the optimal productivity push, technology adoption and diffusion must reflect local needs and the characteristics of each country in addition to being inclusive. While technology is a crucial tool for economic progress, it will not automatically keep a country climbing the productivity ladder if not appropriately managed along with other socioeconomic factors ensuring optimal benefit. The current productivity downturn in EEs indicates the need to ensure productivity gains from technology. When that need can be met, a rebound in productivity growth in conjunction with technology-based increases in living standards will be achieved. 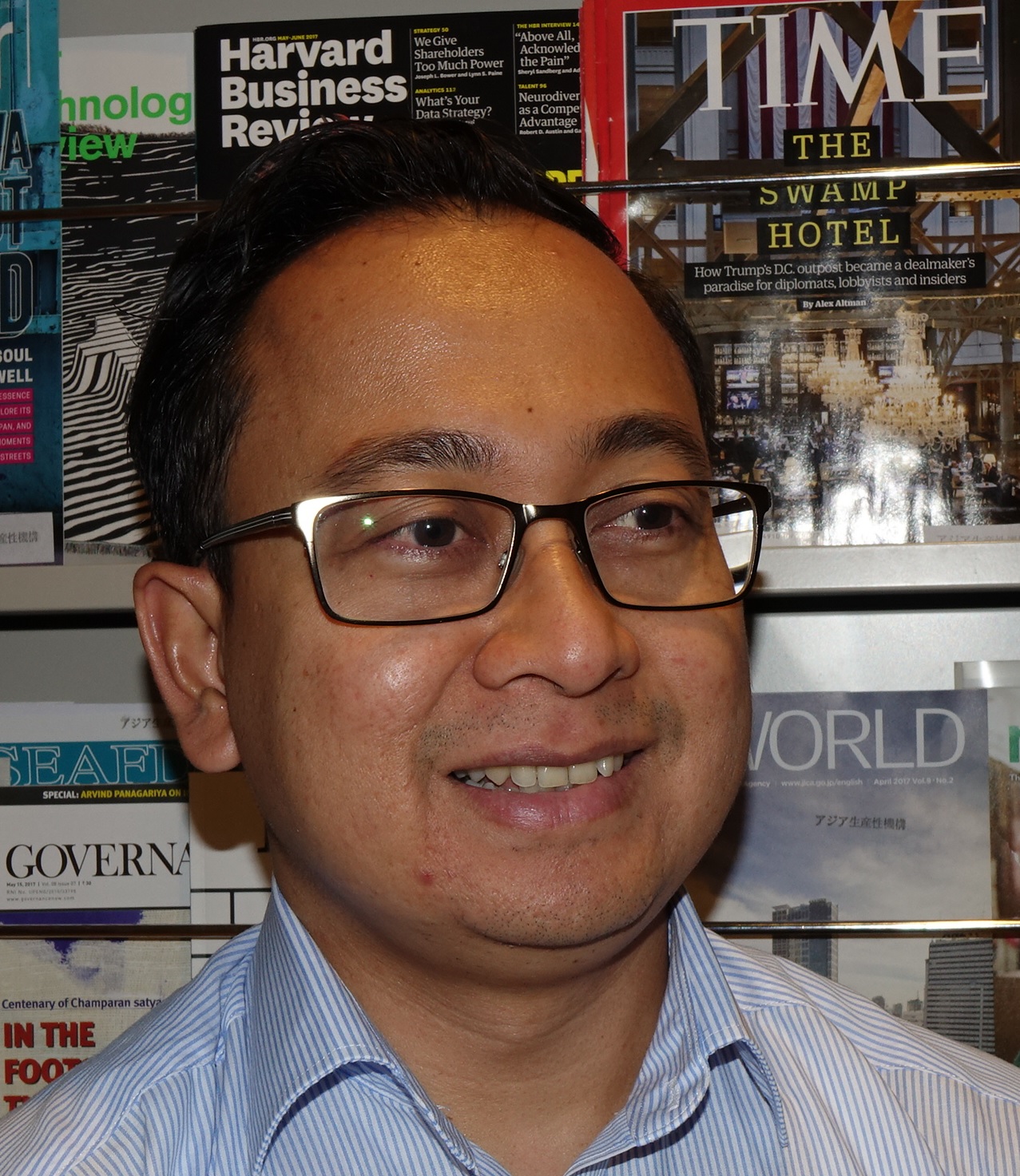 Buana is an economist and Program Officer in the Industry Department of the APO Secretariat.