Quest for the Holy Grail

As Industry 4.0 becomes reality, economies in the Asia-Pacific region are unprepared. Here are some home-based alternatives. 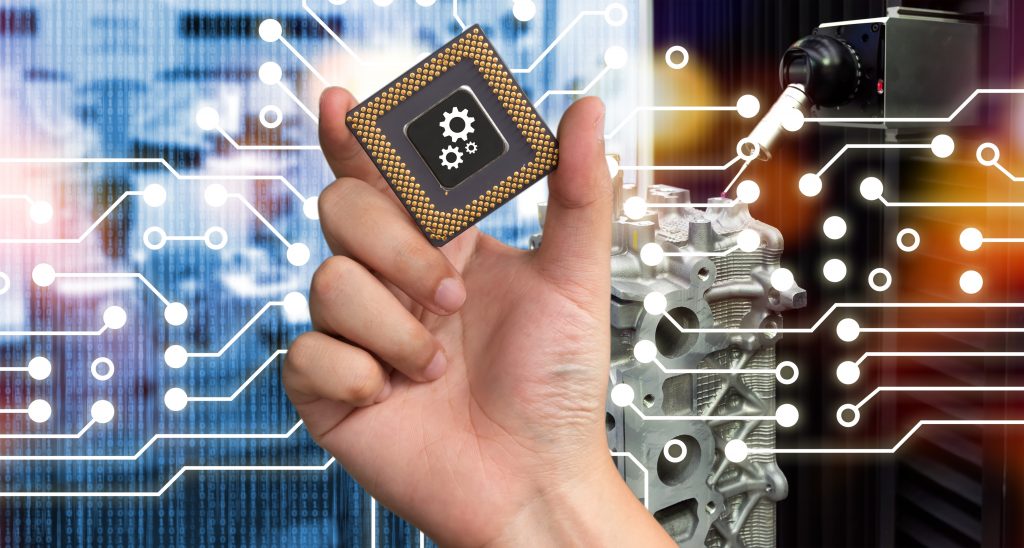 The recent enthusiasm for Industry 4.0 in the manufacturing sector is obvious, although opinions differ on what it may offer or take away. Industry 4.0, like its predecessors, is simply a label given to a transition.

Although the trend is relatively new, many industrial influencers are trying to ride the wave. Many others, however, are reluctant to get caught up in the current. The impacts of the industrial revolutions from the first to the current one are explained in brief below, and the Asia-Pacific’s readiness to adopt Industry 4.0 or alternatives is examined.

Merits and drawbacks
The first and second industrial revolutions altered manufacturing forever by democratizing products, while the third and fourth democratized production. The advanced manufacturing systems ushered in by the first and second revolutions meant that fewer handmade but more machine-made products became available. This lowered prices and increased living standards for upper- and middle-class workers. Newly built bridges and railways forged geographic connections as specialized labor and factory systems were created to cater to the demand for goods. Time-based work systems were introduced, and public schools were established during that era.

However, it was also during that time that cities became overpopulated with job-seekers, causing unsanitary conditions and pollution. The slave trade and child labor was prevalent. Children were an ideal source of labor since they were paid less than adults. As urban populations rose, so did the demand for food. Many sellers cheated customers by adulterating food, allowing them to sell it at high prices at a fraction of their cost. The factory system, on the other hand, divided society into white-collar and blue-collar workers, which fuelled the rise of the Gilded Age and unstable economic growth. A decline in skilled craftsmen and increase in the social power of guilds were also impacts of the first two industrial revolutions.

After transitioning to the Third Industrial Revolution, the gap between blue- and white-collar workers was reduced. Green energy was encouraged to lessen the impacts of the first and second revolutions on the environment. Since the Third Industrial Revolution marked the beginning of the democratization of production and the age of automation, a new market landscape was created. There were vast opportunities for small- and medium-sized businesses to thrive. Consumer preferences also shifted from cheap mass-produced goods to more personalized items. Advances in technology made computers accessible and affordable to the masses, changing the ways people interacted and communicated. That also created new platforms for sellers and buyers to connect, eliminating the need for middlemen.

The democratization of production also meant that marginal profits on tangible goods were at risk due to the sharing of know-how, allowing consumers to make their own products at nearly zero cost. Almost anyone could build a factory, set up an Internet site, or create a company. This meant that while many new businesses emerged, many also declared bankruptcy. Gaps between rich and poor widened, and new forms of education were introduced. The popularity of on-demand learning soared due to the constantly changing skill needs to cope with new technology.

Many countries are still trapped in the second and third industrial revolutions, although some are starting to take a leap toward the fourth. The Fourth Industrial Revolution, introduced nearly six years ago, in Germany, began with robotics applications in manufacturing. That made it possible to customize products in large quantities in less time. It also meant that people were replaced by robots since jobs became more dependent on machine-to-machine communication.

In early 2017, Foxconn announced that 60,000 workers would be replaced by robots, leaving the question of what would happen to those employees. Based on the World Economic Forum report on the Future of Jobs 2016, 7.1 million positions (two-thirds from the office and administration categories) would be whittled down to 2 million new ones in several smaller categories. Citi and Oxford University also predicted that 77% of all jobs in PR China would go to robots. This was supported by Bank of America Merrill Lynch research, which showed that PR China was the fastest robotics adopter worldwide and purchased more than 57,000 in 2014 alone. Industry 4.0 will minimize role of humans from production to decision making, thus making overdependency on technology a reality.

The first and second industrial revolutions led to higher quality and productivity, although goods were homogeneous. By the end of the Second Industrial Revolution, mass customization became possible; at the beginning of 21st century, some businesses were starting a shift to more traditional product personalization known as “bespoke.”

Industry 4.0: To adopt or not to adopt?
According to Stanton Chase, in 2016 the amount of information stored worldwide exceeded 5 zetabytes and was expected to increase 50-fold by 2020. Several requirements must be met for successful introduction of Industry 4.0, including quality Internet infrastructure, advanced IT and data security, a surplus of skilled labor, and motivation and awareness of industry leaders. Several countries have embraced Industry 4.0, including Finland, Germany, Israel, the Netherlands, Singapore, Sweden, Switzerland, and the USA. While several Asian countries have made significant efforts to do so, many are struggling to keep up with the changes it is bringing.

Several challenges stand in the way of Asian countries’ transition to Industry 4.0. Slow development of key infrastructure despite significant financial investments, rigid education systems, and shortages of highly skilled labor are examples. Many industry leaders as well as governments have taken initiatives to usher in the Fourth Industrial Revolution, with little result so far. Based on a 2016 survey by PricewaterhouseCooper, more than half of industrial companies in the Asia-Pacific region planned to invest 6% or more of their annual revenue in digital operation solutions, while 39% of companies in India planned to invest more than 8% of annual revenue in Industry 4.0. Those are impressive commitments. Yet only 40% of industries in the Asia-Pacific rated their digitization level as “high,” and only 19% believed that advanced technology data analytics were secure.

Additionally, many lacked the motivation to embrace Industry 4.0. A report based on a Microsoft study indicated that 80% of business leaders in the Asia-Pacific were aware of the need for operations to become digital but only 29% had a strategy for that in place and only 49% utilized digital solutions in parts of their businesses, while the rest had limited or no strategies. Simply put, we are not ready yet.

Aside from the lack of motivation and technological challenges, the shortage of appropriately skilled workers is a challenge. As production processes become more complex, new skill sets are required to manage them. The amount industries are willing to invest in skill upgrading remains a mystery. Based on a 2016 World Economic Forum report, enrolment in social science, business, and law courses was higher than that in subjects critical to mastering technology such as engineering and science in several ASEAN members. Making matters worse, a complete overhaul of educational curricula to adapt to Industry 4.0 is almost impossible. At a recent roundtable meeting during the Times Higher Education Asia Universities Summit, leaders were unsure of how to prepare graduates for Industry 4.0. Several expressed concern that educational institutions would become “slaves to industry” with total curriculum reform.

All of this evidence tells us that we are not ready to embrace Industry 4.0 but need to start the journey toward it. In the meantime, finding solutions to ensure business sustainability in the current situation is critical.

Home-based alternatives for the Asia-Pacific
ASEAN, PR China, and India form the world’s largest labor market. In other words, the Asia-Pacific has abundant skilled labor who can be retrained as master craftsmen. In a world where equality means similarity, differentiated products stand out. Demand for handmade customized items reflecting consumer individuality is on the rise. The increasing newly wealthy population, especially in PR China, have led to the “youniverse” trend among the niche consumers. Led by the fashion industry, many famed brands are incorporating this trend and showing growth in revenues for bespoke products, especially cosmetics.

Based on a survey by Deloitte in 2015, one in five consumers interested in bespoke products were willing to pay a 20% premium, 22% happy to share data for personalized products, and 48% willing to wait longer for customized items. This means that while price and time are not the main concerns in the bespoke market, quality is.

Over the last few years, all major luxury auto brands have seen increased demand for personalized vehicles in Asia. The growth in nonessential consumer categories such as imported cars, electronics, and recreational equipment surpasses that of primary goods in Asian economies. In the snack food sector, for example, the bespoke chocolate Le Whif lets buyers experience chocolate by inhaling instead of eating it. This shows that consumers are leaning toward wants, not needs. It is predicted that by 2030, Asia will be home to 66% of the global middle-class population and 59% of middle-class consumption. Now seems like a good time to change the business model and “go ancient.”

Handmade crafts are surging in popularity worldwide, as offered through online marketplaces like Etsy and Folksy and featured on social media like Instagram and Pinterest. Traditional crafts have significant potential for poverty reduction, since the artisan sector is estimated to be the second-largest opportunity for rural employment after agriculture in many parts of the world. This has garnered a lot of attention, especially from social philanthropists. However, the trend remains underutilized in most Asia-Pacific countries.

The changing market landscape from homogeneity to individualized products or services yielding higher profits could contribute to national goals of reaching high-income status. Instead of automating, industry leaders may want to consider going back to their artisanal roots. Although this alternative is not meant to replace Industry 4.0, it could be adopted to sustain businesses in the current economic situation.

Ashaari is a consultant specializing in productivity and quality improvement initiatives such as Six Sigma strategy, lean thinking, and kaizen. He is also an APO Honorary Certified Productivity Practitioner.