success_story
The APO »  » A Bakery Uncovers Its Sweet Truth

A Bakery Uncovers Its Sweet Truth

“Of course we never expected a natural disaster to happen when we began operations. But whether conditions were harsh or not, we were compelled to work for a living. We never once thought we had made a mistake or about giving up.” With those three sentences, Julia Lorena D. Manrique neatly summed up Moonbake Incorporated’s survival stance in the wake of the Mount Pinatubo eruption in June 1991 and Tropical Storm Thelma just five months later. And it didn’t end there. Hot on the heels of the double disaster came the withdrawal of US military bases from the Philippines, a sharp hike in living costs, and a higher dollar-to-peso exchange rate.

Things were not exactly looking up for the country and its economy. But Manrique, who is currently Managing Director of Moonbake, refused to be bowed. Yes, it was all very unfortunate but it didn’t change the fact that she had a young business to run. The family-owned neighborhood bakery in Las Pinas City was then barely a year old with fewer than 10 names on its payroll and about the same number of supporters. That was enough for Manrique to soldier ahead. 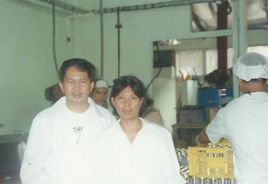 Manrique’s parents, Ana and Jun Manrique, the proprietors and driving force behind Moonbake in its infancy. 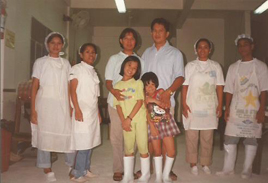 Julia Manrique (in yellow) was six when Moonbake was first established. The business has grown along with her.

A star is born

Her tenacity and patience paid off three years later when Moonbake introduced Chocolitos Chocolate Crinkles into its product lineup. Compared with bread, the crinkles were easier to make, required a smaller production space for a larger output, and had a longer shelf life. Manrique displayed the crinkles in a tall glass jar at the front of the store, and to everyone’s great surprise the jar was soon emptying at lightning speed. “The schoolchildren loved them!” she exclaimed, “and they weren’t even our main product. The crinkles were selling so fast that we decided to offer it to school canteens, and that made a huge difference to business growth. Our whole house suddenly turned into a production plant for the chocolate crinkles, and our operations expanded to order taking and delivery to schools around Manila.” Within a year, Moonbake was selling US$2,200 worth of crinkles each month at a profit of US$300. A year later, monthly sales had shot up to US$17,800. By 1996, it truly seemed that Moonbake had defied the gravitational pull of a heaving economic climate. But Manrique was about to face yet another test of will.

She had noted a slow shift in the balance between Moonbake’s production costs and profits. Product demand had risen but so had the prices of sugar and flour, along with the employee headcount. Profits, on the other hand, had tumbled to a dismaying 5%. By that time Moonbake had taken on 170 employees and was at risk of tipping the ratio of people to production space as specified under the Good Manufacturing Practices.

“Then there were the school vacations where we would only operate three days a week,” Manrique explained. “We would tell our production team to go on holiday and return in June, which of course made them very happy but didn’t augur well for us. So there we were, saddled with the high costs of raw material and labor but with no room to increase our prices. It was a really difficult time.” 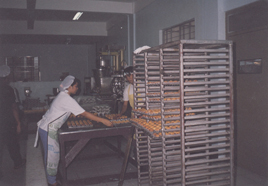 Staff hard at work to meet the soaring demand for Chocolitos. 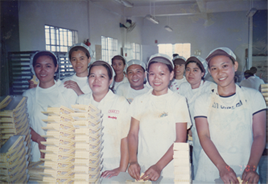 The “magic-makers” of Moonbake who put smiles on the faces of customers with their delicious treats.

The rough ride lasted for the next few years even as Moonbake continued striving to stay ahead by enrolling staff in various business management programs in including total quality management. Then in 2008, through the Development Academy of the Philippines (DAP), Manrique got wind of a knowledge management (KM) demonstration project run by the APO.

The demo project was based on a framework developed by KM experts to provide a common understanding among APO member countries and emphasize its value for organizational success. In October that year, Moonbake became a model company for KM implementation, an initiative organized by the APO in collaboration with the DAP. Manrique admitted to having initial reservations about being part of a project that she assumed would be complicated or require the installation of expensive computer systems. The KM Readiness Assessment Survey, however, changed her mind.

“We were completely taken aback to discover all the gaps that we didn’t even know existed,” she admitted. “It was really an eye- and mind-opener. We realized that all the problems we had over the last decade had stemmed from a lack knowledge. For example we didn’t know what products were right for our market or what would be the appropriate technology to boost the efficiency of our production systems. That’s when we were convinced that KM was the right fit for us.” 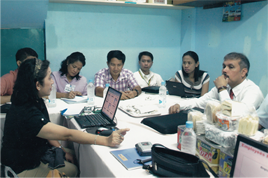 Before performing market research under KM, Moonbake’s only basis for introducing a new product was its CEO’s gut feeling. This decision was then funneled down to the R&D personnel who subsequently asked for feedback from the sales personnel who had conducted a competitor survey. Was the CEO ever wrong? Manrique was diplomatically frank. “Yes and no. The ideas were very good but lacked thorough market research and findings to validate them and identify the target market’s exact requirements. There were several product launches that were not sustainable and had to be discontinued.”

Going from strength to strength

KM-based market research uncovered more surprise findings about Moonbake’s customer base. Manrique discovered that customers wanted new chocolate products and that attractive packaging was a stronger driver of sales than expected. She also learned that Moonbake’s accounting and sales departments were in dire need of a data system upgrade to keep them synchronized with operations.

Armed with new research results and the data system, Moonbake’s president called on the entire team to embrace KM as the top management tirelessly campaigned for the project during general staff assemblies, seminars, and training programs. But they needn’t have worried too much.

Moonbake’s employees were thrilled at the thought of Moonbake becoming a model company for KM implementation in 2009, and their excitement rippled throughout the company. Manrique remembered zero resistance from the team, which fully welcomed the raft of training programs that ranged from market research and intellectual property rights to competency-based human resources management. 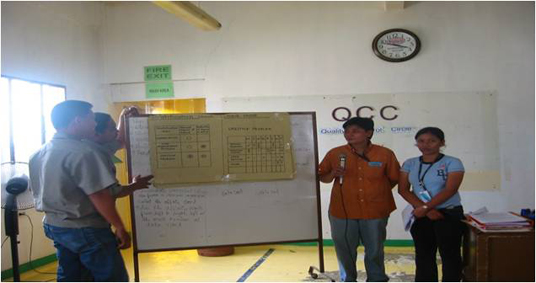 “The positive outcomes became apparent toward the end of the project,” she said. “That’s when we relaunched Choco Dots to a 24% boost in sales, created a proper customer database, and established standard operating procedures for all departments.” That year, Moonbake’s profits jumped 27%. The next year, Moonbake’s newfound appreciation for marketing research led it to develop a marketing plan that included food tastings in schools and identification of focus groups for new products. 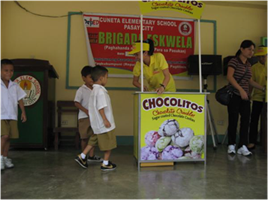 Next in line was creating a sales database template, setting up an archive room, and making soft-copy records of legal documents. In the meantime, employees’ skills were continuously being upgraded and teamwork was being fostered. Later that year, Moonbake took its development and marketing processes abroad but its time there was short lived. Manrique, however, has lost none of her steely determination and is still keeping a watchful eye on the export market. Striking while the iron is hot

In 2012, Moonbake approached a plateau in its production process, and Manrique was quick to act. This time, she knew exactly where the weak spots lurked. Within a few weeks, she had implemented changes that maximized warehouse space, altered the process layout, and introduced incentive programs. The outcome was a 20% rise in productivity and a 30% drop in manufacturing costs. “We were surprised at how much we learned about our business through KM,” Manrique said by way of explanation. “When properly and seriously applied, KM will drive any business forward and elevate its competitiveness.”

Maximizing warehouse space made inventory and other processes more efficient and effective.

The KM demo project also helped Moonbake trim the fat in its manpower and reduced the staff numbers from 170 to the current 118. Yet any fears of a dip in employee morale turned out to be unfounded. Moonbake had applied KM well enough to establish solid support and rewards systems that communicated to the remaining employees that they would be well taken care of. The sales personnel now receive sales incentives, the R&D team is rewarded for each successful product launch, the accounting department is equipped with a system for easy retrieval and reporting of sales data, and the production crew’s enhanced understanding of procedures have significantly reduced damage and waste.

Naturally, this has led to customer raves about good product quality, timely deliveries, and a better relationship with Moonbake. Similarly, Manrique doesn’t hold back in her own glowing review of the KM demo project. “We realized that a company doesn’t need to be high tech to engage in KM,” she smiled. “We’ve found it to be wonderfully simple, applicable, effective, and, most importantly, enjoyable. Now that most of the heavy lifting is behind us, we’ll start revisiting our previous failed product launches in the hope that they might fare better with KM.” 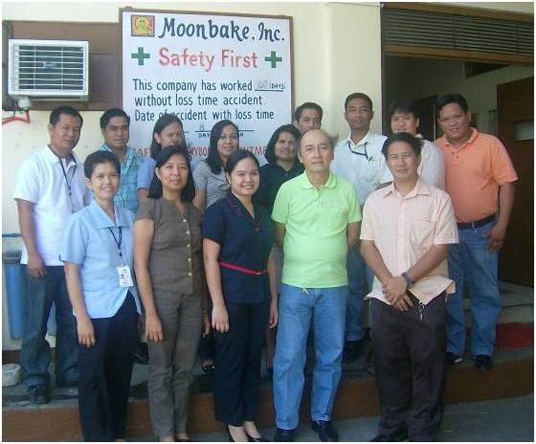