success_story
The APO »  » And let there be light: an Indonesian off-grid solar PV success story

And let there be light: an Indonesian off-grid solar PV success story 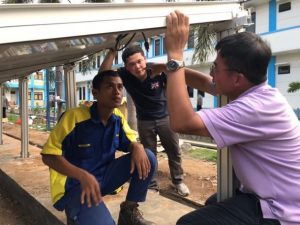 After months of working on the Asian Productivity Organization (APO)-backed off-grid solar PV training project in Indonesia, it was finally time for the first trial run.

International consultants, local partners, and the demonstration company staff were standing by to witness the results of their hard work. Expectations were running high.

Then, with just a click of a switch… nothing happened. There was no power.

“The overall system installation was successful but the first trial had a little problem. All cables and equipment were in place, but the system wasn’t running.

“After a thorough inspection, we found that one of the fuses was dead. Once we got it replaced, the system worked smoothly,” according to Astri Christafilia Litha from the National Productivity Organization of Indonesia.

It was all systems go from then on. However, even before reaching this stage, there were hiccups, especially in overcoming the communication barrier.

The APO-sponsored off-grid solar training project in Indonesia was established as a demonstration PV system and to develop a training curriculum on solar energy, technologies, and off-grid PV systems.

The aim was to enhance the capacity of domestic technicians in utilizing solar energy. The duration for project implementation and dissemination was 12 months, which began in December 2018.

The selected local demonstration company was the Center for Work Training Development (BBPLK) in Serang, Banten province, on Java. The center is a government training agency under the Ministry of Manpower of Indonesia.

From the start, BBPLK Serang had made the needs of the Indonesian market very clear and emphasized the availability of competent technicians who were savvy about how the system should be built, installed, and operated. The demo project had to ensure that the local specialists shored up their capacity sufficiently to pass on their knowledge of solar PV to local trainees. 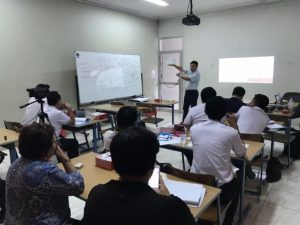 The idea of the PV system was sparked in 2017 when representatives from BBPLK Serang participated in the Green Energy Systems for Rural Applications Technology training course organized by the APO, facilitated by APO-assigned experts from the Industrial Technology Research Institute (ITRI) of the Republic of China.

“During the conclusion of the workshop, Indonesia was very enthusiastic about incorporating solar energy into future vocational training programs in the country, and we brought ITRI engineers to survey the environment at BBPLK,” recalled Joanna Chen of ITRI.

Leading the demo project were experts from Tatung Group, a 100-year-old power and industrial systems company in the ROC dedicated to the commercial operation of solar energy systems in its business arm and to training solar technicians in its education branch, which includes Tatung University.

The demo project in BBPLK Serang consisted of one set of PV modules with lithium-ion batteries and one set of modules with traditional lead-acid batteries. At the outset, it was seen as a technically simple project, considering Tatung Group’s long experience in designing solar energy systems.

However, the installation of the system proved a much bigger challenge.

“BBPLK Serang was very excited about installing a solar project at its training center. For maximum solar energy output, the best place for the system is on the rooftop, but then it would be difficult to access and would lose its educational value.

“The institute had suggested building the system on the outer fence of the training center, so that everyone driving past could see it, but it was technically difficult to install a solar system on the fence and the wiring route would be too long.

“Finally, we settled on the old tennis court and designed the demo project as a land-based system,” explained Chen.

She added that since BBPLK was constructing some new buildings at around the same time, it allocated a budget to prepare the site and pour concrete foundations for the system.

In addition, and as part of its knowledge transfer initiative, Tatung University simultaneously launched a one-month solar energy system installation course at its school, as well as at its Indonesian counterpart training center.

While BBPLK Serang’s seed specialists worked very well with each other and with the APO team, it was discovered that they had another problem: communication and skill coordination remained a challenge.

Neither the Indonesian seed specialists nor the experts from the ROC were native English speakers. In addition, each of the seven seed specialists came from different professional backgrounds and were not familiar with solar energy.

The new technologies were also foreign to the BBPLK Serang team. To overcome the problem, the APO’s experts promoted one of the senior seed specialists to become a course assistant who could act as the communication bridge between the experts and local technicians.

As Chen described it, “In spite of the early communication trouble, BBPLK’s seed specialists and the instructors at the institute were a curious and eager group with plenty of questions for the APO experts.

“They are now ready to share their knowledge and skills with fellow instructors, fulfilling BBPLK’s main priorities of training and development of its technical personnel in the off-grid solar PV system set up on its campus. The demo project also included developing the curriculum for solar PV system design, operation, and maintenance to ensure that locals can be taught to build their own energy sources.

“We believe that they can work together to design a good curriculum incorporating all of these criteria, since BBPLK hopes to develop a new course introducing solar energy systems and training technicians qualified to operate them,” Chen continued.

Bright spark for the future 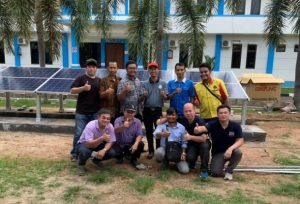 For BBPLK, the system installation was a great success.

“The APO experts were very helpful during the system design phase. They were patient in teaching our instructors and in explaining how to build this PV solar project step by step.

“They also provided direct assistance in calculations for the system design, installation, and commissioning including its operation,” according to Litha from the NPO of Indonesia.

She added that the pilot project would have a positive impact on the trainees at BBPLK Serang.

“This will be a milestone marking the beginning of converting solar energy into electricity to improve people’s lives.

“This solar demo project will have a positive impact on Serang. Communities beyond the reach of the electricity coverage area can build their own independent solar energy facilities to support their daily lives.”

As the first training center to be instructed in solar energy system operation, BBPLK Serang will play a big role in future energy system roll-outs nationwide. With the success of this demo project, the Indonesian Ministry of Manpower and Ministry of Villages are planning to work with the project partners in replicating the system installation course in other training centers around the country.

But there is still a lot of hard work ahead for BBPLK, Chen acknowledged.

“The demo project introduced the basics of solar energy system operation, but for BBPLK to effectively disseminate the know-how, it needs to find the teaching tools, materials, and training equipment to design its own curriculum.

“The training center must observe local people’s needs for renewable energy and consider local criteria like climate conditions, customary electricity use, and attitudes toward energy bills.”

BBPLK Serang has drawn up a new vocational course, which it hopes will create a positive domino effect in improving remote communities. The solar PV system will become part of the government’s rural electrification agenda, particularly in familiarizing the public with the applications of distributed energy systems based on renewable energy and encouraging them to adopt green technology in their lifestyles.

The center also conducts its own training in the solar panel operation system, and the curriculum has been integrated into its two-year industrial electronics engineering program (Program Teknisi Elektronika Industri).

Considering the obstacles at the start of this demo project, the APO’s expert group was very happy with the outcome and with the positive feedback not only from BBPLK Serang but also from the two government ministries involved. 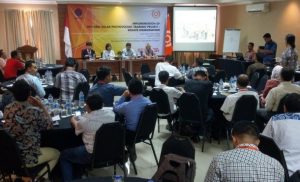 The off-grid solar PV project is part of the APO’s continued promotion of sustainable socioeconomic development. It was fortunate that the ROC’s Center of Excellence on Green Productivity could be relied on to assign the appropriate experts. This project in Indonesia will continue to provide technical support and build the capabilities of domestic professionals in utilizing solar power, encourage the widespread adoption of renewable energy, and contribute to sustainable productivity growth.