Secretary-General Santhi meets a spectrum of stakeholders for wide-ranging discussions of productivity needs.

When Secretary-General Santhi mentioned that Bangladesh was a very active member country, Secretary Abdullah informed him that the NPO Bangladesh was planning the construction of its own 15-story office and an increase in manpower from the current 61 to 398 staff; both changes were in the process of approval. As the overall APO focus was now on the public sector and offering advisory services to its member countries, the Secretary-General outlined the Specific National Program and explained how Bangladesh could take advantage of projects under it. He also emphasized the importance of food security, future food, and other challenges in coming decades and suggested that the NPO seek ways to future-proof productivity gains. Acknowledging that NPO activities had contributed to growth, the Secretary-General suggested that higher productivity levels would be possible by emulating Singapore’s development model in multiple sectors. 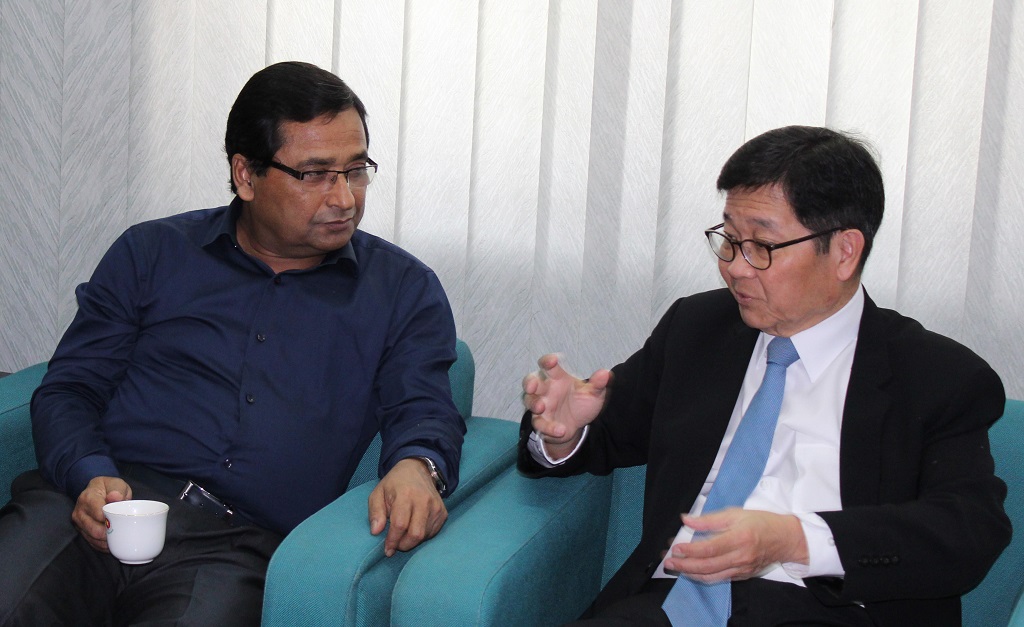 APO Secretary-General Santhi Kanoktanaporn (R) discussing how Bangladesh can take advantage of the APO’s Specific National Program with the country’s Secretary Muhammad Abdullah of Ministry of Industries during his recent visit to Dhaka, 15 March 2018.

Secretary Abdullah thanked the Secretary-General and APO for supporting the NPO and hoped that their collaboration would continue. Bangladesh had fulfilled the criteria to move from the list of least developed to developing countries as of March 2018, he reported, and the government’s visions were reaching middle-income status by 2021, meeting the UN Sustainable Development Goals by 2030, and achieving developed-country ranking by 2041. Secretary-General Santhi congratulated Bangladesh for its improvement and clear visions and expressed his commitment to assisting in national productivity endeavors. In response, Secretary Abdullah noted that APO support would be particularly useful in productivity measurement initiatives for both the public and private sectors.

During an informal meeting with National Board of Revenue (NRB) Chairman and former APO Director for Bangladesh Mosharraf Hossain Bhuiyan, Secretary-General Santhi requested his continued support for the national productivity movement. Chairman Bhuiyan welcomed the Secretary-General on his first visit to Bangladesh and pledged to do his best to assist the NPO while collaborating with APO activities in his new role with the NRB.

At the invitation of Director General Tevita G. Boseiwaqa Taginavulau of the Centre on Integrated Rural Development for Asia and the Pacific (CIRDAP), Secretary-General Santhi called on CIRDAP headquarters for discussions on how the two organizations could work more closely in coming years, building on their current three-year memorandum of understanding under which several joint projects have been undertaken. After Director General Taginavulau informed the Secretary-General of CIRDAP’s current programs and a brief tour of the facilities, they exchanged opinions on future challenges related to food security, climate change, and women’s empowerment as three areas in which the two organizations could collaborate. 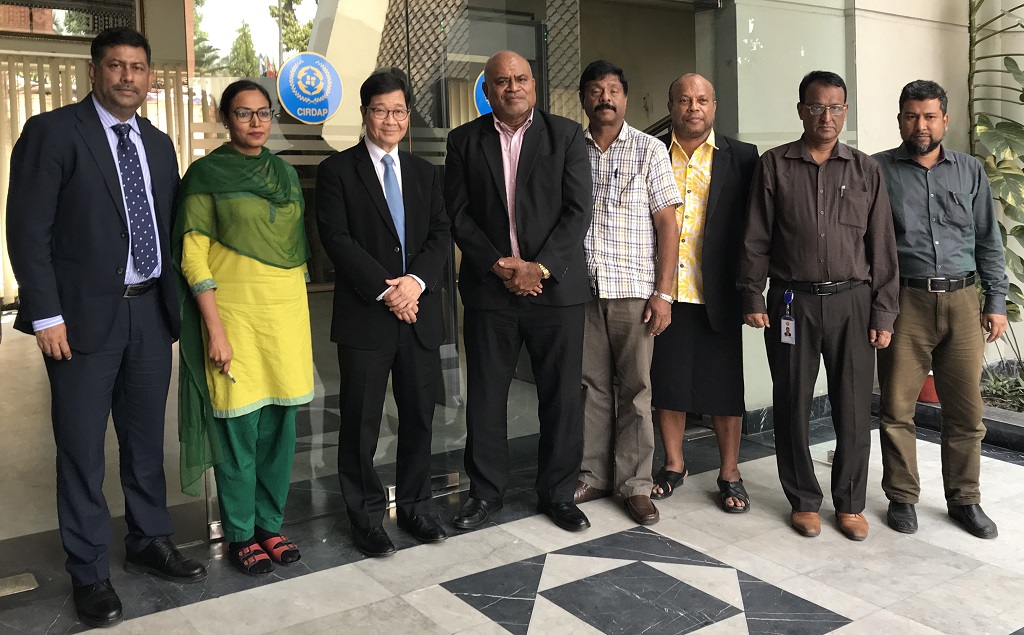 A discussion session was jointly organized by the APO Society for Bangladesh and National Association of Small and Cottage Industries of Bangladesh (NASCIB). The APO Society for Bangladesh consists of around 400 alumni members, and the NASCIB is the apex trade organization aimed at safeguarding the interests of small and cottage industries. Secretary-General Santhi thanked the organizers and stated that Bangladesh had tremendous potential, which the APO could help it achieve through productivity improvement. He listed some of the challenges confronting SMEs and reminded SME leaders to focus on productivity, quality, and innovation. In conclusion, Secretary-General Santhi expressed the hope that alumni societies in different member countries would act as “APO unity bodies” for mutual benefit and dissemination of the productivity message. 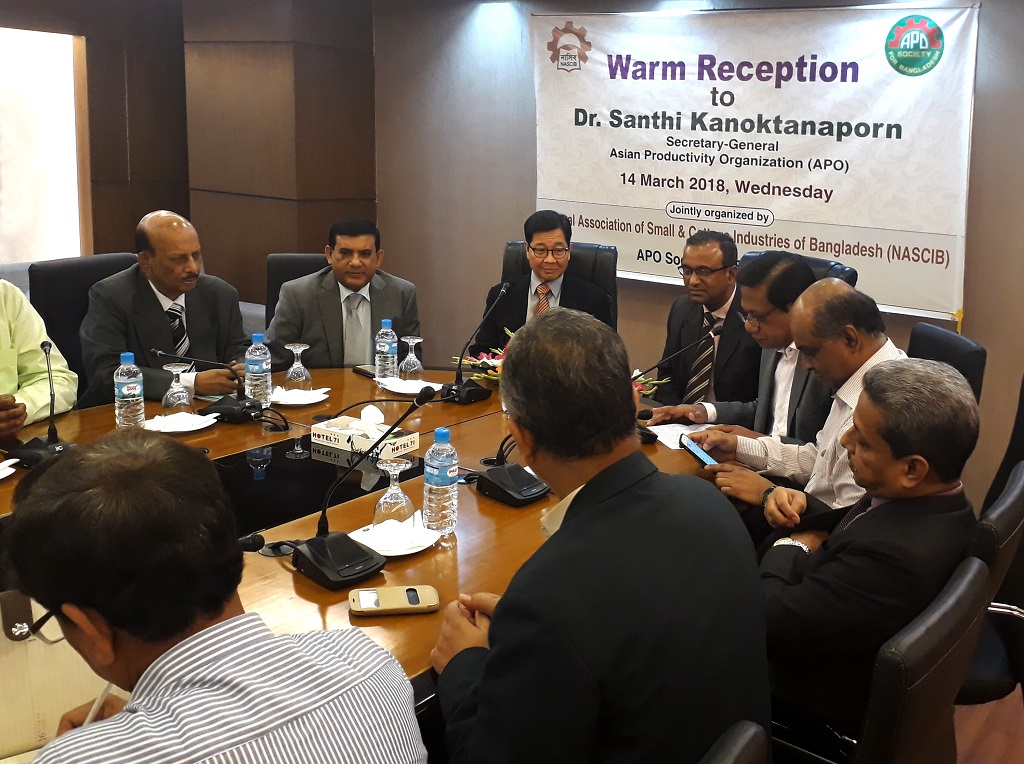 APO Secretary-General (3rd from the left) discussing with the staff of the APO Society for Bangladesh and NASCIB on SME leaders’ roles for productivity improvement in Dhaka, 14 March 2018.