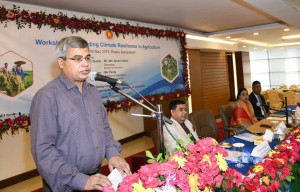 APO Director for Bangladesh Md. Abdul Halim delivering an inaugural address at the opening session of the a workshop on Building Climate Resilience in Agriculture in Dhaka.

To share innovative climate-resilient agricultural models and promote them in member countries, the APO in partnership with the National Productivity Organisation of Bangladesh and Ministry of Industries organized a workshop on Building Climate Resilience in Agriculture in Dhaka, 5–9 May. Twenty participants from 11 countries as well as three resource persons from the International Rice Research Institute, International enter for Tropical Agriculture, and Economic Research Institute for ASEAN and East Asia (ERIA) and four local experts including representatives of the Centre on Integrated Rural Development for Asia and the Pacific attended.

APO Director for Bangladesh and Secretary, Ministry of Industries, Md. Abdul Halim was the Chief Guest. In his inaugural address, Director Halim noted that, as one of the world’s largest deltas, Bangladesh was extremely vulnerable to natural disasters and that nearly 80% of the country was prone to flooding. The situation was worsening due to recent rapid climate change, which had implications for the overall economic development scenario. The agriculture and fisheries sector had been particularly affected, and overall production and production areas had decreased markedly. Director Halim explained that the Bangladesh Climate Change Strategy and Action Plan approved in 2009 articulated the national vision for pro-poor, climate-resilient, low-carbon development in alignment with the Government of Bangladesh’s Vision 2021. The government was now preparing a long-term strategy specifically for agriculture to cope with climate change.

During a site visit to the 51-acre Climate Technology Park of the Christian Commission for Development in Bangladesh, around 60 km from Dhaka, 62 potential technologies for climate change adaptation and mitigation which could be replicated by the poor and marginalized groups, in particular women, in both rural and urban spaces were demonstrated. The visit allowed participants to understand the innovative, low-cost climate-resilient models adopted in Bangladesh. The following day, they divided into four groups to analyze how the technologies demonstrated could be disseminated in their countries, including possible barriers and challenges to overcome. In facilitating the group discussions, resource person from ERIA Senior Economist Dr. Venkatachalam Anbumozhi remarked that the workshop had provided “updated information and good practical examples of climate-resilient agriculture.”