Promising to create a low-carbon region 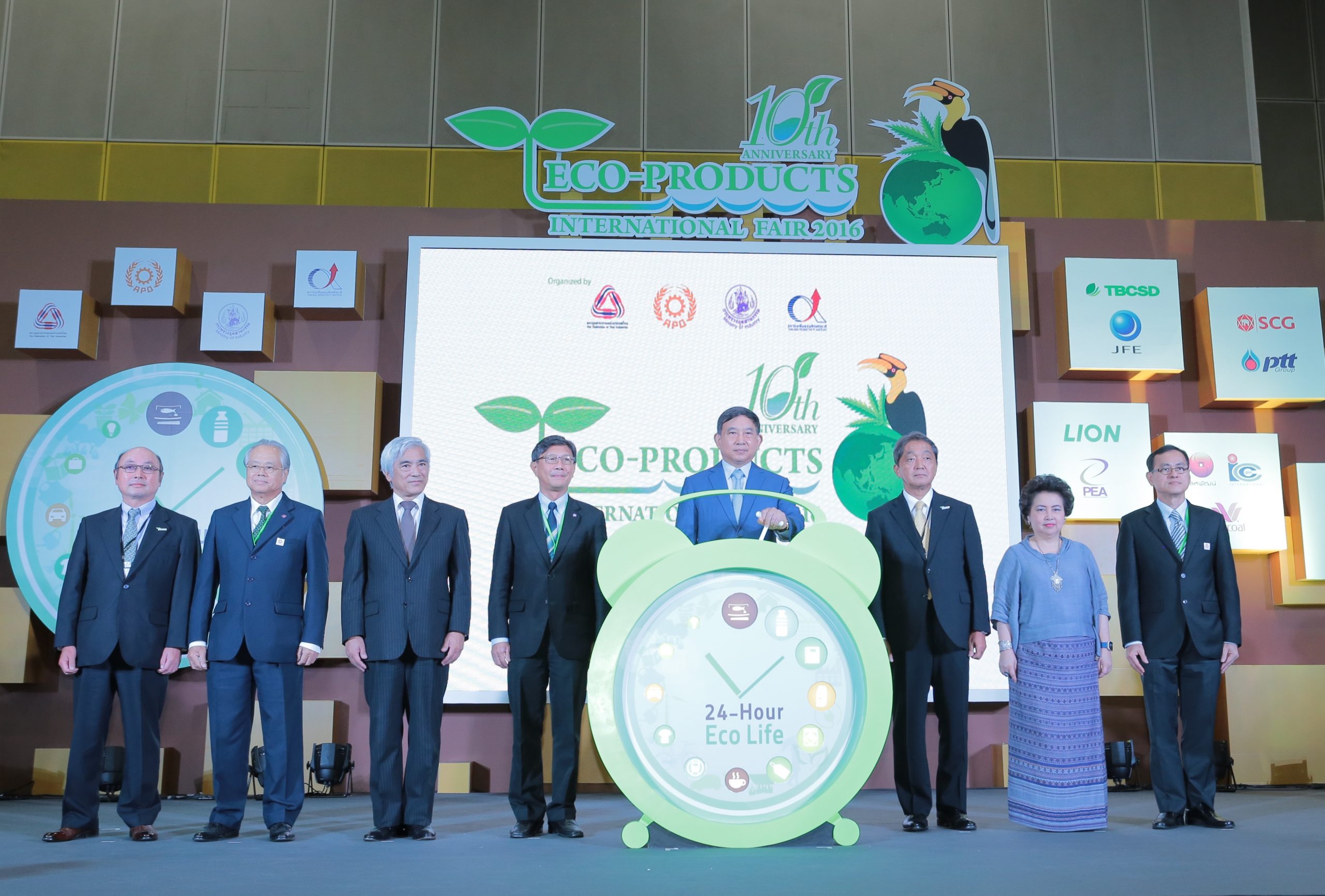 Green was the color of the day as more than 15,000, including representatives from 200 companies, senior government officials from various Thai ministries, members of diplomatic missions in Bangkok, and members of the public attended the first day of the Eco-products International Fair (EPIF 2016) at the Bangkok International Trade & Exhibition Center (BITEC), 8 June 2016. The EPIF also saw a massive turnout from local schools, with children joining adults and decisionmakers to understand how they could make the world greener.

The four-day EPIF 2016 and parallel conference are organized jointly by the Asian Productivity Organization (APO) and Federation of Thai Industries (FTI) in collaboration with the Thailand Productivity Institute (FTPI), through 11 June. The Opening Ceremony was attended by representatives of participating companies showcasing their eco-products, eco-services, eco-technologies, and eco-innovations. Along with the exhibition booths, the EPIF 2016 features green business-matching opportunities and activities to promote awareness among consumers and the public of the need for environmental sustainability in all facets of life under the theme “24-Hour Eco-Life.” The fair kicked off with a colorful Thai modern dance performance that illustrated the role of trees and sustainable development in people’s lives. Representatives of the Thai government, other dignitaries, and industry leaders’ spoke on their commitment to creating a low-carbon society and achieve sustainable development goals by enhancing Green Productivity in the Asia-Pacific region. Thai Deputy Prime Minister Air Chief Marshal Prajin Juntong inaugurated the EPIF 2016 by pressing the ceremonial clock.

Presiding over the opening ceremony, Deputy Prime Minister Juntong stated that Thailand recognized the importance of environmentally friendly industrial development in bringing economic and social sustainability to the country. He said that his country could achieve its targets by applying His Majesty the King’s philosophy of a self-sufficiency economy and implementing policies that would drive the nation toward a low-carbon economy and society. The Deputy Prime Minister highlighted that, as part of its commitment to creating a low-carbon society, Thailand aimed to reduce CO2 emissions by 6–20% by 2020. “We are implementing other energy-saving initiatives that emphasize encouraging more electric cars, promoting renewable energy, developing the rail transit system to lower road transportation, and, most importantly, cultivating our people to participate continuously in environmental protection,” he explained. Juntong also pointed out that while several countries had imposed nontariff measures, primarily focusing on labor, transportation, and waste management, consumers’ demand for eco-friendly products and services continued to increase. “Global issues and sustainable development are the key issues that entrepreneurs should be aware of and develop environmentally friendly production systems accordingly to meet the changing trends of market demand,” asserted the Deputy Prime Minister.

Speaking at the ceremony, FTI Chairman Chen Namchaisiri explained that the EPIF 2016 was organized under the theme “24-Hour Eco-Life” or “A Simple Way to Save the Earth in 24-Hour Daily Life.” He called the fair a platform that showcased a variety of products, services, and innovations as well as displayed the potential of Thai industry to operate with environmental and social responsibility and sustainability. “This expo will also create business opportunities and increase awareness among consumers of eco-friendly products and services,” he concluded. The EPIF features different zones for exhibiting eco-innovations, eco-products, and eco-services from leading domestic and international corporations, government agencies, state enterprises, SMEs, and communities. Many of the corporate booths are from the automotive and transport, construction material, clothing and textile, food and dairy, container, electrical machinery, furniture, and IT and office supply sectors. Of special interest are the Dinsow Mini Robot, Full Dome 3D Animation device, and V-Turn Automatic Turntable. Younger visitors to the EPIF can join in the Eco-Kids drawing and painting contest and the Eco-Clip video contest.

Green Productivity Advisory Committee Chairperson Hajime Bada announced at the Opening Ceremony that about 30 Japanese companies and organizations were participating by exhibiting cutting-edge eco-products and eco-services. “This reflects the commitment of Japanese corporations to contributing to environmental protection along with their determination to disseminate eco-friendly innovative technologies for widespread applications in the future,” he noted. APO Secretary-General Mari Amano stated that the APO had been advocating GP for the past two decades and the EPIFs served as a key platform for spreading the concept throughout the Asia-Pacific region and beyond. He stressed that, “Economic achievement and environmental protection can be pursued in the long term, without trading one for the other.” Deputy Prime Minister Juntong meets the Dinsow Mini Robot, one of the highlights of EPIF 2016, during his visit to the exhibition.