“Productivity is important to make your country competitive, rich, and wealthy. It is also the key to increase the ‘value added’ or profit for the nation. The bigger the GDP, the wealthier the nation is. GDP is also the indicator of the competitiveness and level of productivity of a country,” said Consultant Yasuhiko Inoue of the Japan Productivity Center. He was speaking at the Forum on Labor-Management Relations for Policymakers, Labor Unions, and Top Management organized by the APO at its Secretariat in Tokyo, 17 May 2016. The forum was attended by 32 international participants from 16 member countries. 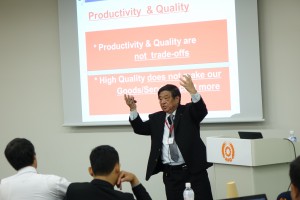 Inoue also highlighted the Japanese approach to productivity and constructive labor-management relations, which had led to the evolution of the country’s manufacturing sector after 1945. “The massive development and industrialization of the country saw it emerge as a mass-scale, low-quality manufacturing base. This was also followed by increasing numbers of labor disputes. However, Japan soon realized the need to reconstruct the economy. While infrastructure development was a key component of development, on the industry front Japan decided to adopt the productivity and quality approach to drive economic growth,” he explained.

He stressed that the Japanese approach to productivity was based on three guiding principles. The first was the maintenance and expansion of employment, based on the strong belief that enterprises should create an atmosphere of job security by ensuring that it will not lay off workers and treating them as a human asset. The second was recognition of the need to create a process for consultation with labor to enable management to discuss all productivity issues, intended plans to improve it, and the outcomes. The third approach called for the sharing of productivity gains. “While it may be difficult, the productivity gains should be distributed fairly (not necessarily equally) among the company, workers, and consumers,” he emphasized.

While welcoming the participants earlier, APO Secretary-General Mari Amano noted that labor-management relations referred to the system in which employers, workers, and their representatives, and, directly or indirectly, the government interact to set the ground rules for the governance of work relationships. “The experience of countries with good productivity records underlines the link between labor-management relations and productivity,” he said. 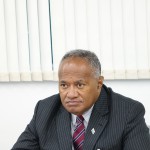 Other key speakers at the forum were Kennichi Kumagai, representing the Japan International Labor Foundation, and Co-Director Hiroyuki Matsui of the International Cooperation Bureau, Keidanren (Japan Business Federation). Isikeli Mataitoga, Ambassador Extraordinary and Plenipotentiary of the Republic of Fiji in Tokyo graced the occasion as the special guest. Also present was Kelera R Savu, the Second Secretary at the Embassy of the Republic of Fiji in Tokyo.

Describing the current issues in industrial relations in Japan and Asia, Kumagai commented that, “While multinational enterprises have a great power to bring abundance in societies, improve productivity, and provide employment it is also important that they fulfill their social responsibilities, including those of human rights and labor.” Pointing out that child and forced labor and discrimination against women are still apparent in many Asian countries, Kumagai stated that it was necessary to improve productivity through labor-management cooperation and to work toward fair distribution of the fruits. He also urged participants to work to improve working conditions and safety and offer large-scale occupational skill development.